Dropped into The Charleston Beer Exchange last evening for one of their free tastings.

I think I go there too often, as we're on first name terms...

Anyway, the tasting was Some of Flying Dog's excellent beers, but on the growler was Sierra's Bigfoot.

The name is apt. This beer has big flavor, aroma, and at 9.6%abv, strength.

It's a dark red/brown beer, and very hoppy. I very much like hoppy beers, in fact a local brew, Palmetto Pale Ale, is one of my favorite session beers, if I can find it on tap.

This beer has a sweeter finish, and as well as being hoppy, is malty too. A nice balance in my opinion.

I don't think I could make this a session beer, as it's a little too strong to swaff a gallon down and remain upright, but I could easily be persuaded to try and prove myself wrong....

Get down to 14, Exchange Street and get a jugful while it's on.

Wednesday Jan. 28 5pm to 7pm
Liz Volz of Aleph Distributing will be showcasing some of her most exciting beers from their eclectic international portfolio.

Friday Jan. 30 5pm to 7pm
Matthew Lipton of Millenium Beverage will be sampling us on some very unique Belgian ales: Gulden Draak, Piraat and Leute Bok.

Rare Beer Tuesday (Jan. 27)
Their special five o'clock tapping this Tuesday will be Smuttynose Really Old Brown Dog Ale. They are one of the only places in the Southeast to receive this special product on draft. This will be going on at the same time as their Flying Dog tasting so go on down and kill two birds with one stone.
Posted by Eyebee at 3:46 PM No comments:

Posted using ShareThis
Posted by Eyebee at 2:38 PM No comments:

Selected this beer at our local beer store and I must admit, the name intrigued me. With a name like Belgoo and the fancy font, it peaked my curiousity.
Described as a "top fermented 4 grains craft beer", the ingredients in this non-filtered beer are barley malt, wheat malt, oats, German wheat and Saaz hops. Pours a white golden color and a respectable amount of head while the flavor is quite sweet but not overpowering.

For some this may not be a session beer at 6.6% ABV but I found it to be quite drinkable and would revisit this Artisanal Belgian Ale again.
Posted by Sickpuppy at 6:20 PM No comments:

I can honestly say I haven't had many coffee beers, only three that I can think of. Kona Pipeline Porter, Redhook Double Black, and a homebrewed AG batch which was the only beer I ever dumped a portion of.

Both the commercial beers have been good in their own way. The Pipeline Porter has a more prounouced and sweeter coffee flavor, whereas the Double Black is definately more bitter and reminiscent of an espresso shot. I think the Pipeline Porter would be a coffee beer that would appeal to the majority, but in my opinion the Double Black is outstanding as well. For a larger brewery like Redhook, they did an excellent job on this one.

What other coffee beers are out there, and what did you think of them?
Posted by Anonymous at 7:41 PM 2 comments: 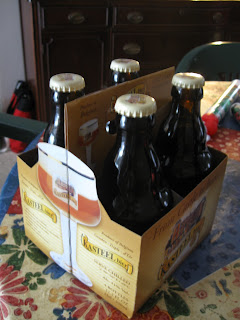 From the Van Honsebrouck brewery, the beer is a dark blonde in color.

It retains it's head very well, and is big and bubbly when pouring.

It reminds me of pears to drink, but this beer is no slouch on the alcohol content at 11% abv, and it very quickly reminds you of that fact. It might be a little too strong for some, in that the alcohol grabs you almost quicker than the flavor. There's a sugary taste there too, and perhaps cloves.
Some like it hot, some don't. If you like it hot, you may like this.

For all that, it's not a heavy beer. It has good carbonation, and is smooth to drink. 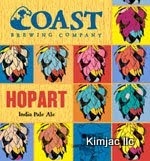 HopArt IPA from Coast Brewing, who are situated in North Charleston, SC
is a fine brew indeed.

Walking a fine line of sweet malt and assertive hop character. A hop presence so enticing it truly is a work of art. (7.7% abv).

It is brewed year-round.

I sampled this at Sesame Burgers and Beers, in Spurril Avenue, North Charleston last weekend, and a really fine brew it is too.

It's unpasteurized too, which means it's had nothing taken away, and it's full of flavor, with jsut the right amount of bitterness balanced by the maltiness.

Heck, I'm getting thirsty just talking about it here!
Posted by Eyebee at 1:12 AM No comments:

Being the Good Beer Show's resident funny guy and full-time stand-up comedian, I get the opportunity to drink a lot of beer in a lot of different places... Last night it was at the Mash House, a local brewpoub in Fayetteville, NC.
The Mash House took a silver with their IPA in 2001 at the GABF, and it's a hop bomb. Not quite the punch of a Gumballhead or a Stone's Arrogant Bastard, but a fresh tasting palate-wrecker in its own right, and more than worth drinking.
There were a few other beers of note: their Hefeweisen, Blueberry Blonde, Stout, and "M"perial Stout.
The Hefeweisen was cloudy and damn near looked like orange juice in the glass. It had a floral nose, and a very spicy and slightly floral flavor. The tart spiciness reminded me a little of a saison. This was definitely the standout beer in the bunch, though not a session beer (at least not for me.)
The Blueberry Blonde would have rocked ass with a slice of cheesecake. The blueberry flavor was very strong and inordinately sweet. I'd bet it was done with a syrup rather than with the actual fruit, though I didn't get to talk with the brewer. I wouldn't drink a whole pint of it, at least not if there was something else around, but my wife would dig it.
The Stout was creamy and slightly sweet, with a thick, tan head that laced well and a definite dark fruit flavor. Very drinkable, if you fall on the sweeter side of stout fandom.
The "M"perial was a stout on a different level, though. Also thick and creamy, it wasn't as sweet and didn't have nearly the same dark fruit presence, but had a rich, satisfying chocolate flavor. It had nearly twice the ABV, and warmed the belly, but no obvious alcohol burn.
The food was good, too, but I really have to comment on the asparagus (I have become a fan of asparagus in the last couple of years.) My portion came with 6 or 7 spears, each about 5 inches long and about as thick as my thumb. Buttery, but not overly so, and seasoned simply but perfectly, they were wonderfully al dente, not woody or mushy.
The rest of the beers on offer (Irish Red, Blonde, Porter, and Nut Brown--which was their seasonal offering) weren't bad, but didn't really stand out to me. The bummer about this place is that, while the brewer owns the recipes, he works on a salary and doesn't share in the profits of the beers, so he has little reason--outside of festivals-- to innovate or market the beer beyond the restaurant. I wonder what North Carolina (and maybe the rest of the country) is missing out on...
Posted by Mikey Mason at 5:55 PM 1 comment: This post will be short and sweet. The Sierra Nevada 12th Release Harvest Wet Hop Ale is an excellent beer. I drank one last night and it hit the "spot". I have had this one back in October and my initial thoughts were this is going to taste and smell like wet grass. I could not have been further from the truth. When poured the aroma is an explosion of hop goodness that gets up in the sinus' tickles the reptilian brain of all that is good in this world. This beer has a nice hint of malt sweetness that complements the serious thick hop "layers" that come through as you drink it. It finishes with a trailing bitterness that is very pleasant. If you can find this beer definitely give it a go. 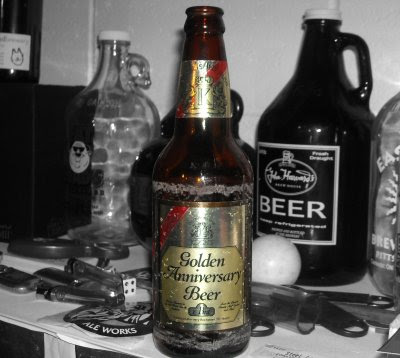 January 1st has traditionally been the stepping stone for a new beginning. New year, new start and dreams of making life better. Before you can move forward you have to look back at what got you where you are. I thought it would only be fitting that my initial post on this site, also first of the new year, is the first beer I ever drank. I'm not kidding, that's the bottle I swiped from dad's stash 17 years ago.

I don't know why I saved it. Honestly, I think it was to impress some girl. I've moved many times since I first drank that glorious bottle of Golden Anniversary and always displayed it with pride through college and then in my 20's as a conversation piece. Now into my 30's it serves as a reminder of where I came from. It's a symbol of my birth into beer which has grown into a passion and obsession for the craft beer industry.

Next time you see a person partaking in beverages of a lower quality keep in mind that was once you and someone opened your eyes to a world beyond cheesy commercials, ads and hype. In 2009 I ask that you become the flavor savior and educators. It's time to show people the light.