Rock Stars Among Us 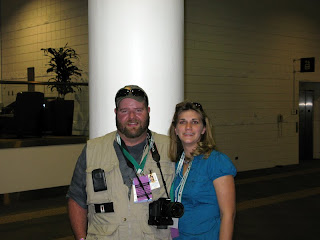 The complex simplicity of beer is something that can be enjoyed by almost anyone. Unfortunately, most of the people I know think "Good Beer" is Coors Banquet Beer.My Wife and I were that way onece, but good fortune has caused us both to grow and expand our pallets. You can imagine my excitement when SWMBO (@Kahunaschick) decided that the GABF was one of those things that we should do EVERY YEAR! She went last year, and put up with me and the other homebrewers that we met there, but I figured it was just her putting up with me. Come to find out...She really liked it. This year, she has found a taste for a few different kinds of beer, and is getting over the BMC that ruled our younger lives together. She is leaning toward Belgian and sour beers, with or without fruit.
We attended 2 of the sessions at the GABF in Denver this year. We were at the Friday night and Saturday Members sessions.
We had the privilege of being the first 2 people to get the PRO-AM entry from olllllo and Papago Brewing...Ladies First! 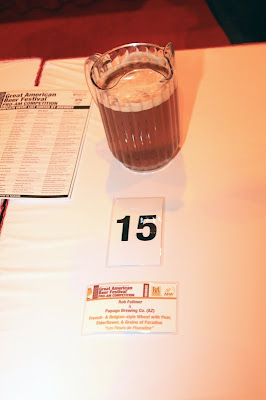 This thing was damn good! I hate farmhouse saison ales like I hate warm diet pepsi, so I had low expectations. The pear nose was phenomenal, and the clean crisp flavor really cleaned up my perception of a French Farmhouse! With ollllo being someone I know from Homebrewtalk.com and also follow on twitter (He is a blogger here too) It was cool as hell to be drinking his Pro-Am Beer...and to be the first 2 glasses poured, I was happy with that.
Awards and famous people are as abundant at the GABF as the beer flowing from 1200 taps. Successful brewers are adorned with attention and praise becoming of a rock star. The cool part, is most of them are still just beer guys at heart. There are a few that have a holier than though personality, but most of them will brew you a beer, pour you a beer, then drink one with you while you hang out. Most of the rock star brewers we met definitely remember when they were just like us, and are appreciative of our support for their beer.
So when I got a chance to get a picture of SWMBO at a tweetup at the GABF with Mr. Charlie Papazian, I took it. What an opportunity! I was actually star struck when we met Charlie...and that just doesn't happen to me! But this is the man that started it all! He is the reason we have a GABF to go to. And he is just as normal as can be. 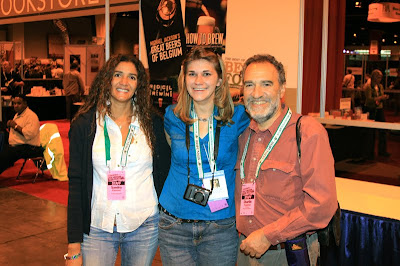 We got a chance to spend some quiet time with a few friends (It still seems odd to me to call people I meet on the Internet and see once a year friends, but it's true!) we met with IronOrr and his wife for dinner with one of their friends and his wife. Then we met up with olllllo and his wife, and Don from Naked City Beer in Seattle. So here we are, having dinner and drinks with friends that are so close to the rock star brewer status that you about can't stand it...and they are just as cool as anyone you'll ever meet.
IronOrr, Brewtopia and I got our picture together while hanging out at the GABF after we all tried the samplings from Cascade Brewing. They had a total of 5 bottled sour ales available including a sour brewed with fresh pressed wine grapes and a Kirek that was perhaps the best tasting example I've ever had. The one picture that I missed, and will kick myself for a year for not taking...is the picture of our wives!
I did get a picture of my SWMBO with Blogger ChipperDave, olllllo, and Blogger Raiseyourpints at the tweetup.

So as I think back on the GABF and all of our friends we have met and talked with, I have to wonder which ones will be on stage next year! These people are truly Rock Stars Among Us!
Posted by The Limon Leader at 11:39 AM 2 comments: